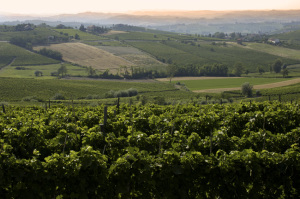 Panoramic view typical of the "low Monferrato" area. This picture taken near Fontanile

Piemonte (eng> Piedmont) is situated in the northwest of Italy with borders to France to the west, to the north lies Valle d’Aosta and Switzerland and to the east is Lombardy with the fashion capital of Milan; it also touches a small part of Emilia Romagna, the internationally renowned region of cheeses and hams. To the south is the rocky strip of Liguria that separates South Piedmont from the sea by only 30 kilometres.

It is the topography of a large part of this territory that gives it its name Piedmont meaning "the foot hills", providing breathtaking scenery, great skiing, nature reserves and many historical and cultural sights from castles to hill top villages and abbeys.

Of great interest in these Piedmontese hills, from the Monferrato to the Langhe they have become famous throughout the world for ‘enogastronomia’, the perfect marriage of the natural products available here, the cheeses, the pasta, the truffles and the wines.

The enchanting area of the lakes, in particular Lake Maggiore and Lake Orta, steeped in natural beauty are easily reachable from La Granica.

The region benefits from a continental climate that makes every season a perfect season to visit in, you won’t be disappointed!

In the hills of the Monferrato, summer is hot with pleasant breezes. In spring and autumn the weather is dry and warm and an ideal time to discover the region, which is rich in colour and perfume. The winter is cold for a short period, and  heavy snowfalls can occur. 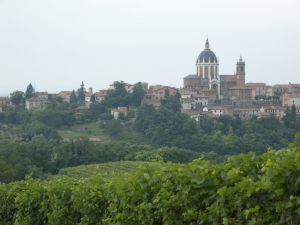 View of the hilltop village of Fontanile, taken from the valley ridge above La Granica


It is not easy to find a definition, which covers an area as diverse as the hills of Piedmont. Not just an area full of farming and wine making, but molded on the historical political and economic changes from the original feudal system, the constant power struggles of Napoleon and the church through to the impacts of the industrial power house of Turin.

The Monferrato covers a large area; it extends from the hills of Turin and the Po River and finishes at the Apennines of Liguria. It includes parts of the province of Alessandria, in particular the zone of Casale Monferrato to the north and Acqui Terme in the south, and the famous wine region of the Province of Asti.  All around are rolling hills and valleys packed with vines producing the renowned wines of the area, Barbera, Dolcetto, Cortese, Moscato and many more.

The region is also rich in medieval castles, Baroque monuments and churches from the Romantic, Gothic and Renaissance eras.

Not faraway from the towns of Asti and Alessandria in the High Monferrato region of Asti you will find the ancient fortified village of Fontanile, situated 275 metres above sea level.

The village was originally constructed around the 5th Century, though the village one sees today was reconstructed around the 10th Century on the ridge of the hill so it could take advantage of this strategic and defensive position.  Just as important Fontanile is set amongst lush and verdant farm lands that used to produce cereal crops as well as grapes.  Indeed the name Fontanile means place of springs and so since Roman times has been a useful residence of many powerful & influential families, if only for summer retreats.

Not far are the larger towns of Mombaruzzo, Acqui Terme, Nizza Monferrato and Canelli and a little further Asti and Alba.

The city is situated at the western edge of the Pianura Padana - the flood plain of the Po where the rivers of Doria Riparia and the Po meet.  The original capital of Italy, is a city woven into a rich tapestry of art and culture, with many world-class museums and the splendid residences of the Savoy family, the ruling dynasty of Piedmont, which sprang up in the course of their reign museums, including the largest Egyptian collection outside of Cairo. It is a true centre of culture that is shaking off its image of its' industrial past and emerging as a true international centre for culture and the arts. In architectural terms the city has shining examples of mediaeval buildings also with a large part of the city built firmly on the Baroque style. There is a large Roman area in the city. Turin is also where Italian TV and cinema was first broadcast from and it celebrates this in the Museum of Cinema, which is housed at the Mole, this building is a symbol of the city. 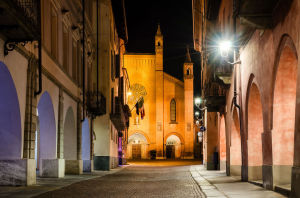 Alba is an ancient medieval town famous for its' many Towers, on a historical note, in the 1600s the tower was a symbol of nobility which is why so many sprang up in the city. Alba has many building of architectural interest such as the gothic church of San Domenico and the baroque church of the Maddalenaena, the civic museum 'Federico Eusebio' where you will find the story of Alba. To the south of Alba is Langhe area and to the north of the city is the Roero area; in both there is much to see and do in the way of hilltop villages, castles and natural parks and of course wine tasting the renowned wines of this region.  Visit the villages of Barolo and Barbaresco that give thier names to the famous Nebbiola wine brands, both historical places to see and experience the wines at the many cantina open to the public or  visit the regionally sponsored "Enoteca" that promote tastings, sell wine and provide information on all things related to the wines of the area. 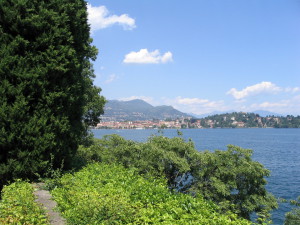 Visiting the lakes is like going back in time to the beautiful formal gardens of the past, with magnificent villas and outstanding natural parks with rare botanical species. In this area there are a great many sports to take part in: sailing, windsurfing, horse riding, golf, trekking, mountain biking, hand-gliding and parasailing.  Or you could get to know Lago Maggiore and Lago Orta by foot or maybe by walking up Mont Rosa,  and in addition there are the lesser well-known lakes of Viverone & Candia in Canavese or the two lakes of Avigliana at the mouth of the Susa Valley. 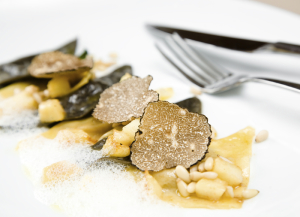 The origins of the unique gastronomy of this area relate to its peasant past, over many years these dishes have been refined and enriched using the genuine products the local area has to offer.
The cuisine has been influenced from traditional French methods and dishes, from Mediterranean culture of the Ligurians and the plain robust flavours of Lombardy and Emilia Romagna, mixed together to form the eclectic dishes of the Monferrato, which are various and renowned throughout Italy
You can find in some of the more interesting restaurant dishes which had been lost and brought back to the palate of the modern piedmontese: le verdure crude con la bagna cauda – raw vegetables dipped in a garlic, anchovy and olive oil sauce, gli agnolotti – ravioli stuffed with roast veal, gli gnocchi, le zuppe, i risotti – risotto with truffles, la carne cruda, il vitello in salsa tonnata – slices of roast veal in tuna sauce, i formaggi freschi o stagionati – fresh and mature cheeses, il bollito – boiled meats, il fritto misto di carni e verdure – battered & fried mix of meats and vegetables.

The impressive cuisine of the Monferrato continues with the fabulous porcini and truffles of both white and black varieties and desserts range from bunet al chocolate, baci (kisses) of Acqui, krumiri di Casale of nougat, sweet polenta (corn) cakes to the famous soft amaretti of Mombaruzzo.

To accompany every dish there is of course a perfect local wine: Barbera with a robust body and a dry taste, Freisa agreeable & fresh with a light structure, Grignolino light coloured red, sometimes rose' with fruity aromas and strong acidity. If your preference is for white then Cortese could be for you, it is dry, harmonious with citris overtones and best known as the brand "Gavi di Gavi" For dessert, it is essential to try the Asti spumante or the Moscato both sweet and sparkling, Malvasia has a soft, sweet & aromatic taste and finally Brachetto, which is very delicate and fragrant red often produced sweet and sparkling. 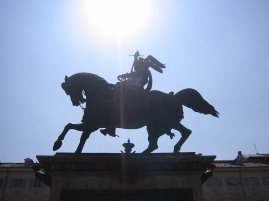 Traditions in the Monferrato are intrinsically linked to the rhythms of the seasons and the rich agricultural heritage that exist to this day.
Today, all areas even the smallest villages have their own religious days, festivals, markets, holidays and degustazioni – gourmet-tasting days that showcase the best food the Monferrato has to offer.
Food and the advent of the ‘Slow Food’ movement has been one of the main reasons why these days continue year after year: la polenta, il risotto, l'asparago saraceno, le frittelle, la robiola, il peperone, la bagna cauda.
Historic events are re-enacted: l'Assedio di Canelli – the seige of Canelli, every year is held to celebrate the famous victory in 1613 of Gonzaga di Mantova of Monferrato who took the city.  Then there is the famous Palio di Asti, in September which re-enacts the famous horse race from the 8th century.
It is also a testimony to the quality and the originality of the artisans who display many hand made products at the numerous antique markets in Asti, Nizza Monferrato, Canelli, Acqui Terme that these markets keep going from strength to strength.